We reached our destination, Novgorod, at around 7pm. Our little group was joined by about twenty people on the outskirts of the town and we all rode into the centre with a police escort! Classic.

After another speech we rode about 2kms down the road where there was a crowd waiting. I got interviewed by the local tv station (the novelty has kinda worn off now) with a local girl (kate) acting as a translator. 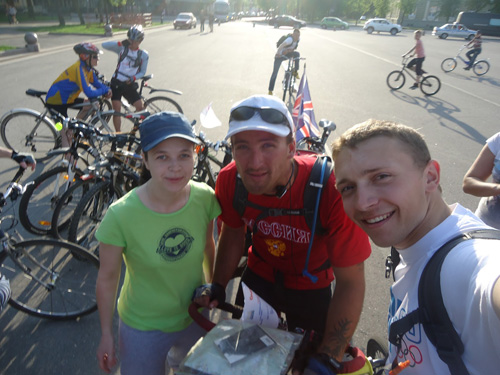 Then it was off to the hotel, where I sat down to pen last nights entry. About half way through writing it the tour guide came in and said that his boss had been on the phone and I wasn’t allowed to cycle with them any more! I thought this might happen as I was getting a fair bit of attention and I think this was detracting from the publicity the group was getting. The guy was very apologetic and said I could follow the group and stay at the same places and that he would give me a map of the route, I’m just not allowed to appear on TV or give any interviews. Suits me down to the ground, I prefer cycling on my own anyway. 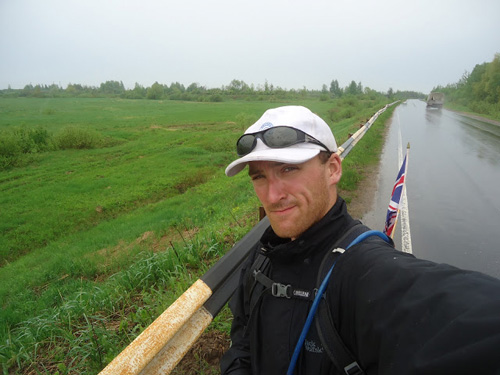 Not a happy bunny. Who’s idea was it to cycle to Russia?

This morning I felt dog rough. The weather didn’t promise much either with rain coming down by the bucketload but hey, fortune favours the brave right? So I put my waterproofs on and hit the road, about two hours after the group had left the hotel. The rain filled the pot holes in the road making it impossible to gauge the depth of them resulting in two snakebites within the first 15km.

Ralph Butler, bicycle traveler
Read more: «I’ll make it to the moon if I have to crawl…» (Ralph Butler)